Forensic Engineering Study of the Dismasting of a Sailing Superyacht

A dismasting is a failure of at least one of the masts of a sailing ship. Dismastings may be due to either failures in the rigging which stabilizes and reinforces the mast under sail, or due to some weakness in the mast itself. At great distances from shore, a dismasting of an ocean-going yacht could be disastrous. The subject vessel was originally built in 1983 and remodeled as a one- hundred-fifty-seven-foot, length overall, three-masted staysail schooner, luxury passenger craft for re-launch in 2001. 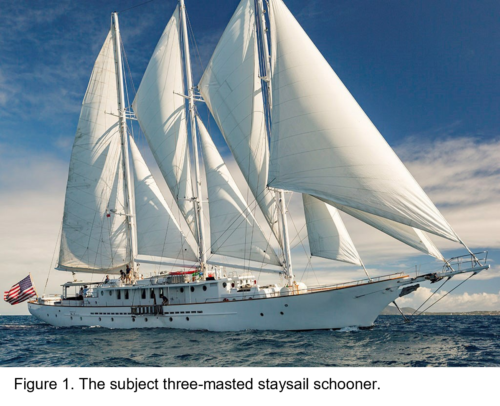 In 2016, while under sail along the Virginia coast, the original foremast failed, and the ship was taken to Cape Charles, VA, for repairs.

The 100-foot, aluminum alloy foremast failed in two places. There were no witnesses to describe the sequence of the failure, which occurred with buckling at fifty feet above the base and by separation sixteen feet below the buckling. Forcon conducted a forensics examination to determine the sequence and cause of the failure.

The mast was pulled from the ship. There was no apparent damage to the rigging which could have caused instability of the mast.

The lower failure showed only overload fracture of the mast. 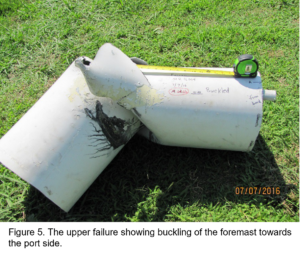 The upper failure showed buckling and cracking of the aluminum mast shell. The upper failure had several unusual features. Besides the buckling towards the port side, three features were evident: horizontal cracking parallel to the buckling, pulling apart along the vertical weld line, and large, deep weld penetration “nuggets” along the port-side weld.

The semi-cylindrical sections were given an elongated S-shape along one edge, to allow overlap welds, and that shape is evident in the figure above. Welds were performed from the outside, through the outer plate. A metallurgical examination pursued hardness along the hot-weld nuggets, and microscopic examination location of the fracture paths both vertically and horizontally. The vertical fracture did not follow the weld path, but rather around the weld hot- spots. The aluminum alloy may be returned to full hardness after freezing, but material along the edge of the weld which is overheated but not melted may form broad soft zones with large grains, termed heat-affected zones (HAZs). Softening of within the HAZs was documented by microhardness traverses of cross sections following the surface normal to the red cut lines in the image below. The plate was originally 1/4” thick. The hardness traverses were at the mid-line of the lower plate, or 1/8” from the bottom (outer surface).

The HAZ minimum hardness values were found to be significantly softer for the hot spot welds than for the welds or the base material. The hardness values corresponded to tensile strengths of 35 ksi for the base plate and weld nugget, 33 ksi for the HAZ of the good weld and 29 ksi for the HAZ of the hot spot weld. The crack path along the hot spots went along the HAZ region which was about 20% weaker than the plate. The horizontal cracks showed signs of exfoliation corrosion. Exfoliation corrosion may follow failure of the protective paint layer due to subsurface cracking.

A detailed study of the fracture surface showed thick oxidation layers in the HAZ cracking. The first cracks in the history of this 33-year-old mast were along the HAZ. The subsequent failure was horizontal, and characterized by exfoliation corrosion, with layers of material removed parallel to the plate surface.

The mast was assembled by seam welding of shells, with welds in the longitudinal direction (which was vertical on the mast). The hot-spot nuggets were only found in the region of buckling and were associated with the HAZ cracking. Weakening of the seam allowed more flexing of the mast, failure of the protective paint and corrosive attack of the plate. The flexing and corrosion led to the horizontal cracking and buckling. Once buckling of the upper mast occurred the aerodynamic instability of the mast altered the loading on the lower mast and caused the sudden shear fracture closer to the base.

The hot spots were a manufacturing defect which would have been difficult to observe by visual inspection. The hot spot nuggets were on the inside of the masts. Detection would require the use of internal inspection, x-ray imaging or some other type of nondestructive testing such as ultrasonic thickness testing. One visual indication of unusual mast flexing was the separation of the paint on the outside of the mast. That effect was observed near fractures and could have been present prior to catastrophic failure. An inspection protocol was recommended which included paint inspection along with more sophisticated non-destructive testing methods.

ABOUT THE AUTHORS
Roy Crooks, Ph.D., P.E., is a Scientist and Professional Engineer with broad experience in Forensic Engineering and Research and Development, education in Chemistry, Biology, Physics and Materials Science, and Classroom Instruction. He is also a current user at three Federal Labs and four University Labs. Mr. Crooks also more than 500 hours of lecturing experience as an Adjunct Professor in Materials Science in the Mechanical Engineering Department of the Naval Postgraduate School (Monterey, CA). See Roy’s full CV here.