Automatic sprinkler systems have proven to be the single most effective fire safety tool in reducing loss of life and property in building fires. Building codes recognize the benefits by allowing less restrictive code requirements regarding the construction, height and fire areas for most buildings than would be required if no sprinkler systems were installed. As a result, many more buildings of all types and uses are typically equipped with automatic sprinklers than prior to 10 to 15 years ago. Sprinkler systems were typically installed only in commercial, industrial, warehouse, larger mercantile stores, and in some nursing homes. More recently, however, these systems are also typically found in the full range of commercial, educational, and institutional facilities, and in both low- and high-rise hotels, motels, offices and apartment buildings. More and more single-family homes are also protected with automatic sprinkler systems.

With this greater presence there seems to have been more frequent occurrences of freeze related incidents in recent years resulting in water leakage and associated water damage to buildings and contents. The physical phenomena involving freeze related leakages is quite simple, but the causes and the factors with the resulting damages are often not simple to determine. When sprinkler systems suffer freeze related failures, it is simply the result of water in piping forming ice when the temperature of the environment where piping is located goes below freezing. When ice forms in the closed vessel of the piping, it exerts tremendous forces that cause the piping to crack. This can occur in steel, copper, and plastic piping systems, with piping fittings of all kinds (See Photos). When the ice plug begins to thaw, water then discharges freely from the fracture in the piping. Ice plugs can also force open the saddles or plugs in the sprinklers themselves and then discharge water though the sprinkler orifice.

How can this happen when the codes and standards that apply to sprinkler systems include criteria intended to avoid freeze failures and serious consequences of such events seem so obvious? Despite the regulations in place and the common knowledge that should prevail to prevent such events, the record sadly shows that these factors are all too often the culprits: 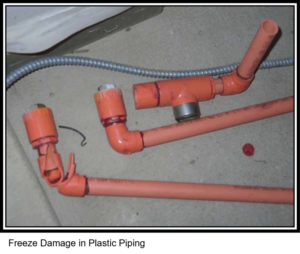 The codes and standards state that wet pipe sprinkler systems shall not be installed in any area where temperatures are not maintained at 40°F or higher. When systems are designed and installed, the environment in which the piping is installed should be readily determined either in the survey of existing buildings or review of plans for a new building. One common factor associated with wet pipe systems freezing is when the building envelope has not been adequately insulated and sealed to keep freezing temperatures from exposing the sprinkler system inside the building. In some cases, the sprinkler system design and installation places the piping at locations inside the building envelope where it is impossible to insulate it from freezing temperatures.

One example that I encountered recently is where sprinkler system piping was installed in the walls of partially open, unheated stairways. The piping ran vertically just inside the stair wall and in contact with the uninsulated wall sheathing. The insulation in this wall that separated the stairs from the apartment units was actually placed between the piping and the wall of the heated apartment unit! This greatly limited the heat transfer from the apartment into the space where the piping was located. In another case, the piping was installed several feet inside an exterior wall in a ceiling space above and below heated areas of the building. Usually, this would provide an environment where the piping would not freeze as long as the room was heated, and the exterior wall was properly insulated. However, unsealed openings around an outlet through an exterior wall for a dryer vent duct that ran through the same ceiling space allowed freezing cold air to flow into the ceiling space. The piping froze, cracked and then water poured down into the floors below.

This lack of construction quality control and coordination was also found in another incident where the system piping was properly installed just above the ceiling below an unheated attic. The building design included insulation to “tent over” the piping; however, the lack of quality control in the final stages of construction failed to provide sufficient insulation to prevent the piping from freezing when single digit temperatures occurred the following winter.

WHERE ARE THESE SYSTEMS REQUIRED?

Sprinkler systems are often required to be installed in unheated areas. In such cases dry pipe systems are required. A dry pipe system is normally pressurized by air. Water is kept from the filling the system by a dry pipe valve which includes a clapper that is held closed by the pressurized air. When a sprinkler activates in a fire, the air pressure drops, and the clapper swings open allowing water to rapidly fill the piping system and discharge through the associated sprinkler onto the fire. Unfortunately, when cracks in the system piping occur due to ice formation, the air pressure drops, and water rapidly fills the system just the same as when a sprinkler activates. Water then reaches the failed piping component and flows out into the building, until the system is shut down and drained.

How could a system that is intended to be dry have ice formation in the piping? Well, all systems wet or dry must be hydrostatically tested (with water) as part of the code required final, acceptance tests after the systems are completed. This test is to help assure the integrity of the piping system when subject to the expected water service pressures. For a dry pipe system, the system should be completely drained after this test and then charged with air ready for its normal stand-by mode. However, if the system has not been designed and installed to allow complete drainage, water would be trapped in portions of the system and then would be subject to freezing the following winter. Inadequate means to drain the system usually result from piping that has not been properly pitched to drains or inadequate numbers of drains are installed.

In my experience, most of the freeze related failures involving dry systems are not due to original design and installation flaws. Rather, they are due to inadequate inspection, maintenance and testing of these systems over time after they have been installed, tested, and accepted. Fire codes and referenced standards place the primary responsibility on the building owner or authorized leasing agent to have an inspection, testing and maintenance program in place. The codes recognize that contractors can be used to accomplish this requirement.

Examples of when problems occur include:

In one case, an inspection contractor completed a full trip test of a dry pipe system, that is, he charged the system with water, as required on a minimum 3-year interval. However, the contractor failed to fully drain the system after the test and the system froze and discharged the following winter.

In another case the owner failed to commit resources and implement a program to drain low-point drains prior to the on-set of cold weather, despite the original installation contractor having advised him in writing of the requirement.

The role of the fire alarm reporting system has often had a major impact on the duration of water discharge and resulting damages in these freeze related events. With the exception of sprinkler systems in one- and two-family dwellings equipped with smoke detectors, all sprinkler systems must be equipped with water flow alarms. This is usually accomplished through the building fire alarm system which monitors a flow switch. When these fire alarm systems have not been properly installed or maintained and tested after they have been installed, problems can occur.

A typical example involved a fire alarm system failing to detect and report the water flow from the fractured pipe fitting in the attic of a building. As a result, the discharge was not discovered until someone several floors below discovered water pouring down through the ceiling. If the fire alarm system was in working order, occupants would have been alerted as soon as the system was charged and prior to it leaking, and the system could have been turned off much sooner. Another example is when the communication system between the building alarm system and the off-site alarm monitoring company had been compromised. The flowing system was not discovered in the unoccupied building until the next morning when the workers arrived for work the next morning.

In summary, the causes and factors associated with any freeze related sprinkler system failure can include a whole range of events in the history of the building, and often involve the roles of the owner, construction and system installation contractors, and inspection contractors. Thorough investigations of all these factors have proven to be very valuable in determining the facts associated with such events.